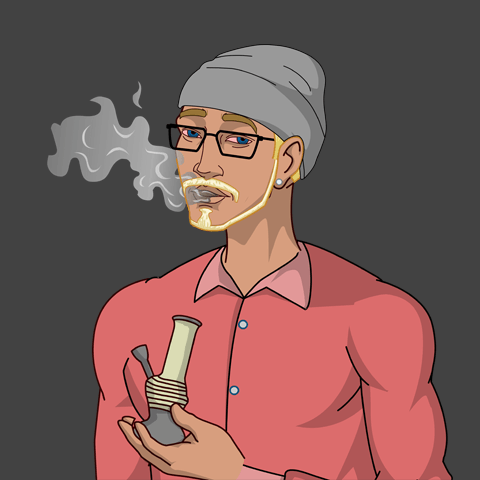 “Hey dude,” Bill said as I answered the phone.

I took a look at my old style, analogue clock and decided, “Around 4:20, that’s when I smoke up.”

I got kind of… absorbed, in an Adam Sandler movie, so I was surprised when the doorbell rang. I looked over at the clock. 4:20. Perfect.

“Bill, my main man! Come on in, I was just about to load a bong.

I knew Bill thought I was a slob, and the state of my apartment didn’t disprove that theory. I led him into the living room and motioned to the armchair as I sank into my own favorite, an old bean bag chair I’d found at a garage sale twenty years ago, when I was nine.

I grabbed my bong. Now, there are bongs, and there are bongs. My bong was, if I do say so, impressive. It was a foot high, made with psychedelic colored plastic with an opening almost too big for my mouth to cover. I packed it as full as a I could, and grabbed my Zippo. I lit up and pulled as much smoke as I could into the bong, then into my lungs. I passed to Bill.

Now, this was some quality shit, not quite as strong as Moon Rocks, but a kicker Indica of about 30% THC. I probably should have warned Bill, who smoked way less often than I did; but I knew he wasn’t driving. He tried to take a drag as big as I did, but coughed halfway through. Still, I could see him react to the head rush and the weed all at once.

I took the bong back, took  hit and refilled it. I took my drag and passed to Bill. Bill was a little more careful this time. This went back and forth about eight times. By the end of it, Bill was completely wasted, just sitting back in his chair grinning.

I watched him, and then took a look at the old clock before refilling the bong.

Bill’s eyes opened as I passed the bong again.

After this one, Bill was totally blissed out. “Wow, man” he slurred.

He managed to turn and look at the clock, struggling to focus his eyes.

He struggled to think. I could tell something was confusing him. Then, his eyes opened wide in a eureka moment.