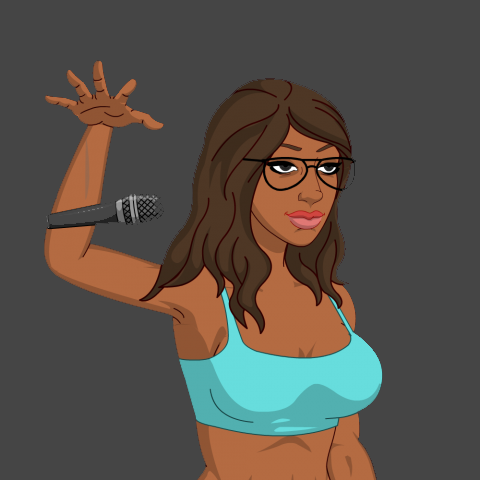 I walked uneasily into the bar, well it was a poetry bar tonight. A bunch of men whistled as I came in, “Looking good sweetheart,” one catcalled.

I turned in his direction, “Up yours, sweetheart.” I gave him the finger as the other guys laughed at him. Emboldened by their actions, I walked more steadily to the MC who stood a little to the side of the stage.

“I’d like to sign up for the poetry slam please.” My voice didn’t shake, that was good, he didn’t know how scared I was. He gave me a once-over, “Aren’t you a little underdressed?” His tone wasn’t condescending just curious but it set me off all the same. I crossed my arms over my chest, trying to suck in my stomach.

There was no way I was letting him know that I literally made this decision while on my nightly run and made a dash here.

He wrote on a clipboard by his side and nodded at me. Satisfied, I went to sit a little far from the stage and waited for my turn.

In what seemed like no time at all, he called my name and I let my mind wander as I went to the stage. Whistles started up again and I smiled, basking in them.

As I gripped the mic, I wondered if he was there, if he was watching me. As the words left my lips, I searched for him but the darkness made it harder to see.

Almost too soon, I was done, and left to an applause I didn’t think I deserved. All the while I was speaking the thought that he was there, watching me made controlling the heat in my body harder.

I got home in a daze and saw him stand in the living room, he opened his arms and I went into them.

He kissed the top of my head, “That was an unusual kind of foreplay. I could barely control myself, watching you stand there reciting my poems.”

I raised my eyes to his, bringing my hand from my back to show the mic I had swiped from the bar. His eyes riveted on it, I let it slowly leave my hand, “Mic drop.” I whispered.

Those were the last words I spoke for a while that night.